Once upon a time (six years ago, commercials), we went with his family to Brussels. Just - go. Ride, we ride, but there was some terrible event that my dear supruzhnitsa recalled at every opportunity, especially in crowds.

The case was what it is. As all self-respecting, tourists, we decided to walk around the city, which got issued at a map and boldly marched out thereof hotel. As it turned out, my navigational abilities, occasionally, can not be valid, so that instead of the recommended area of ​​Gran Plas us we were in the Turkish district.

The case was in the evening, no food, and my wife, if you do not eat anything on time, turns into something compared to what kind of a shrew - the most friendly creature that ever lived on this planet. Overall, I was an ultimatum - come and eat immediately!

Since there are no decent restaurants in the area were not observed, I took the family to a nearby Turkish diner, where we proposed a Turkish version of KFC. Fortified, we left the diner and went to look for this is the Gran Plas, emboldened by the instructions of the owner catering point of "not far from here - right, then right, and there and at hand."

Something like, we did find this area. And it turned out that right next to this area is a narrow street, on which the myriad of restaurants specializing in seafood, which my wife loves (I am to them very calmly, preferring all delicacies large piece pork steak and fried potatoes as a side dish ). Do you imagine the whole nightmare situation? I just fed a family of Turkish chicken distortions, and here! (No, a little exclamation mark - should be at least five. Like this:!!).

Frankly, I do not know how I survived it. If looks could cause physical damage, I would have turned into a pile of ashes, on which the company was a Red Army, after which, the typhoon would be scattered that from her (slides, not companies) remained throughout Belgium. And that's to say the least. But I was lucky and I was able to convince my wife that as soon as finances allow, I will take her to Brussels, head to this street (Damn her) and feed the coolest seafood, which can be found in the bloody Belgium. That something like this.

As a result, I'm still alive. But the promise of his wife has not forgotten, and periodically (on average, once a week) reminded me of it. And now, after six years of this boredom, I gave up and ordered the ferry, hotel and everything you need to survive in the harsh expanse of the Belgian State (if Belgium can be called a state, because it is in a permanent state of half-life).

Hotel we took a rather strange (never in the past did not stop). In fact, it consists of a multi-storey building with apartments (our "room" consisted of two bedrooms, living room and kitchen). No restaurant, and reception (or as it is called in Russian, then?) Is also not as such. Just stand, which sits behind the concierge and provides guests with keys, cards for parking or pizza, bude are hungry. But this hotel is located not far from the royal palace, to which we have decided to take a walk soon after arrival. 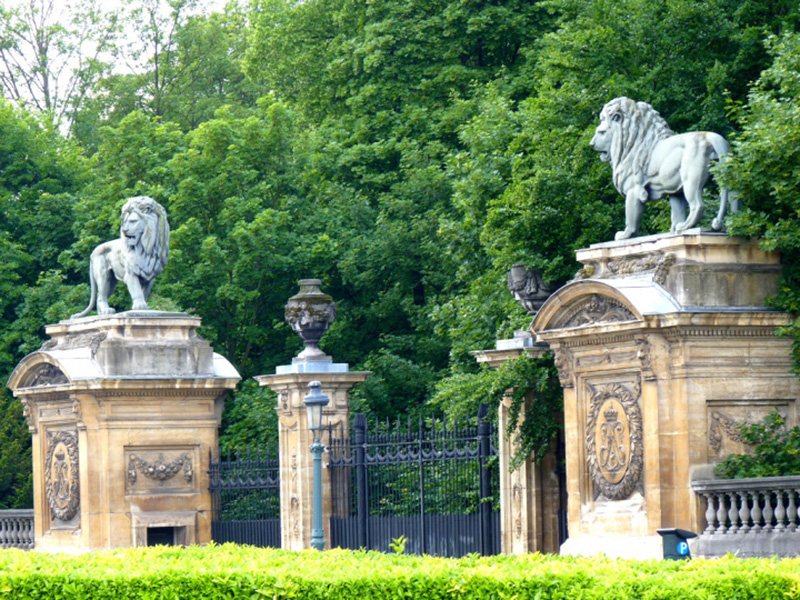 Above - the side (so to say, black) input to the royal palace. And the palace itself - here it is: 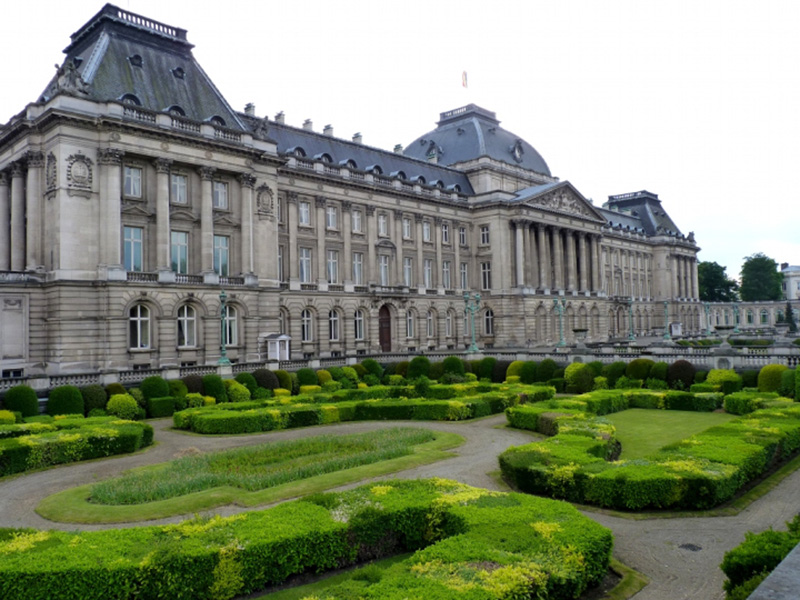 I was about to go, to say hello to Albert II, but, unfortunately, was not home. 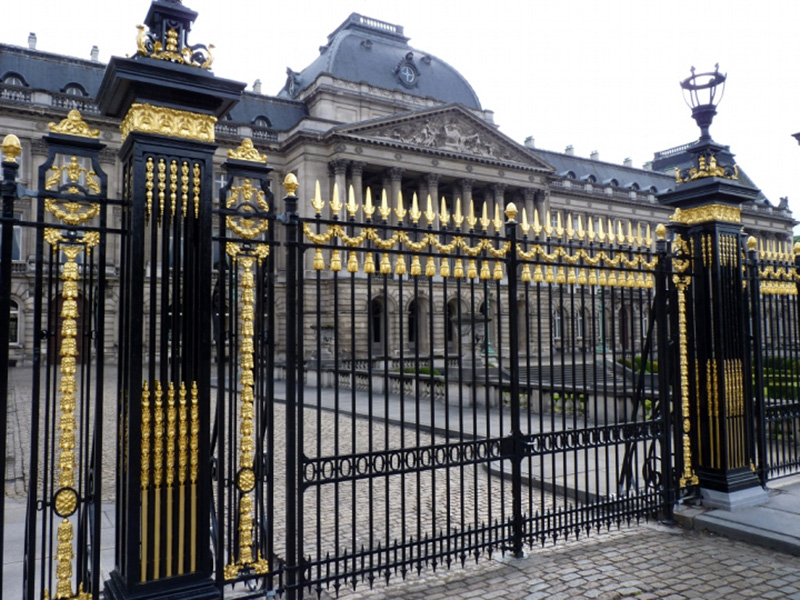 First, I wanted to leave him a note, such as "Alex, I'll come later," but changed his mind - you never know in Belgium Albert? It was not so understood.

Pointedly turned away with his backside to the palace, expressing this pose is all I thought about Belgium and its monarchy, I took a picture of the entrance to the city park: 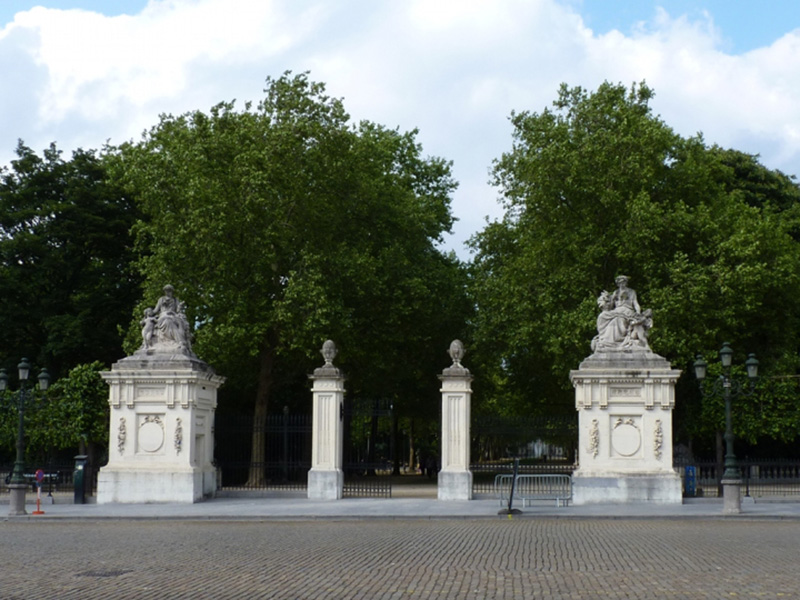 That's it! Let them there myself in the palace knows that a Russo-travelers, just do not. A picture of the palace, I still did - our people fences are not a hindrance: 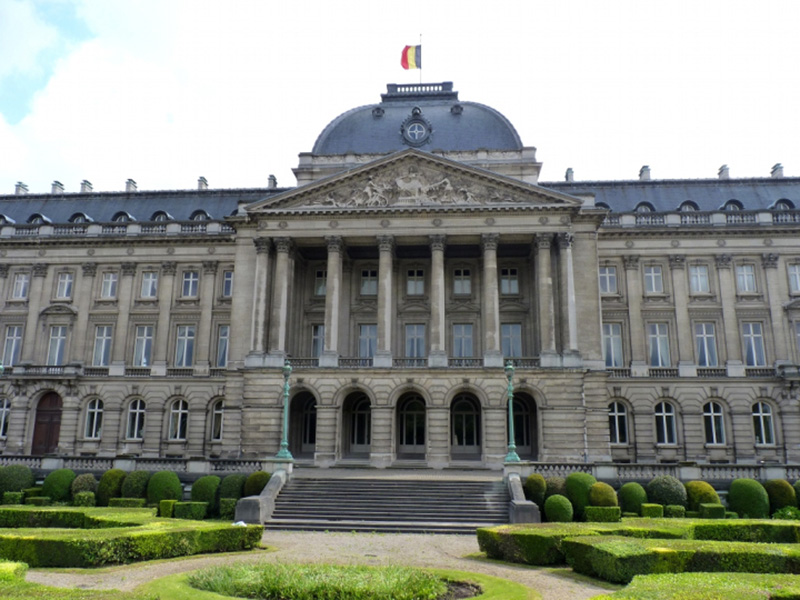 What a picture garden too. I understand, of course, that my wife's garden is much cooler (yes dear, I know you will read it. And it ... get rid of the pan away!) But this also did: 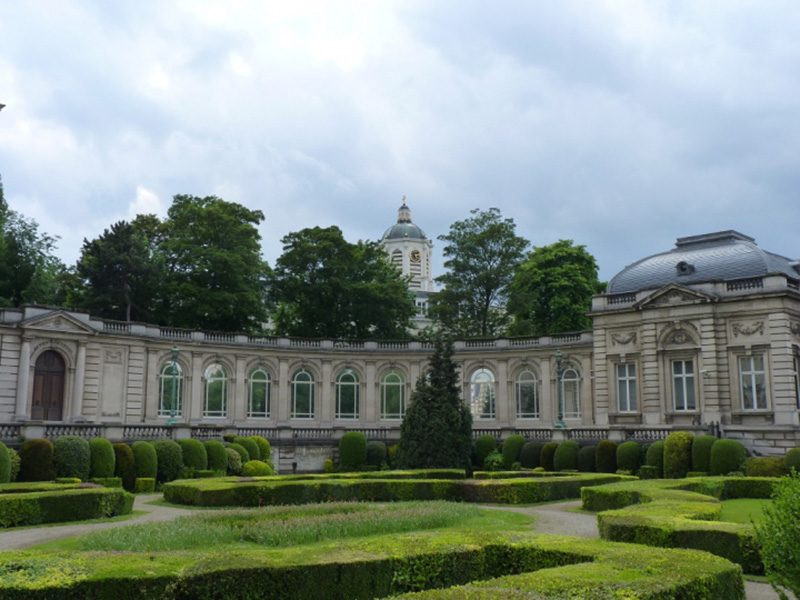 Having dealt with the Royal Palace, we have turned the corner and came to the Royal Square, the center of which is a monument to a certain Godfrey of Bouillon (I'm not kidding, it was the name - Godfrey de Bouillon), and in the background - the Church of St. Jacques Gudenbergskogo. 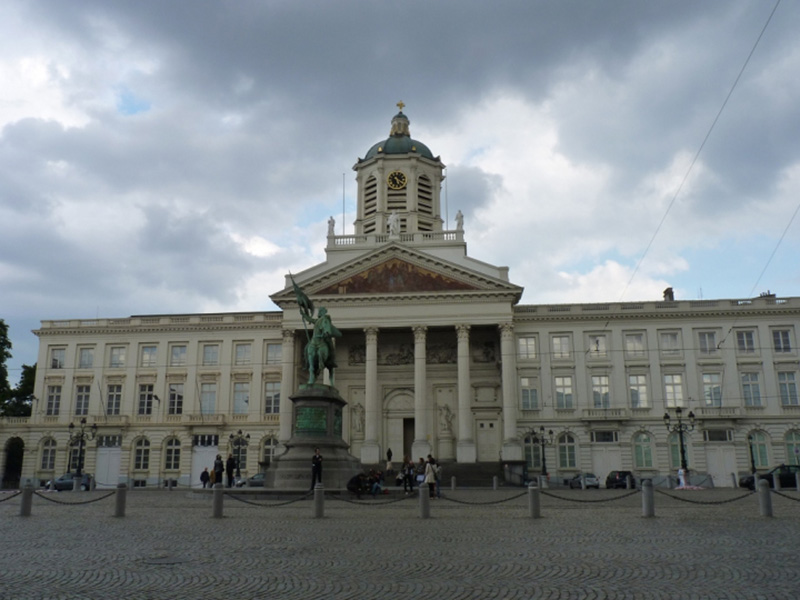 Barely made their way through the crowd of Chinese (or Japanese? I do not distinguish) tourists, fell out of the bus arrived, we decided to go down to the lower town, where is this most Gran Plas its seafood. On the way, I noticed a building that reminded me of home and I did not fail to take a picture: 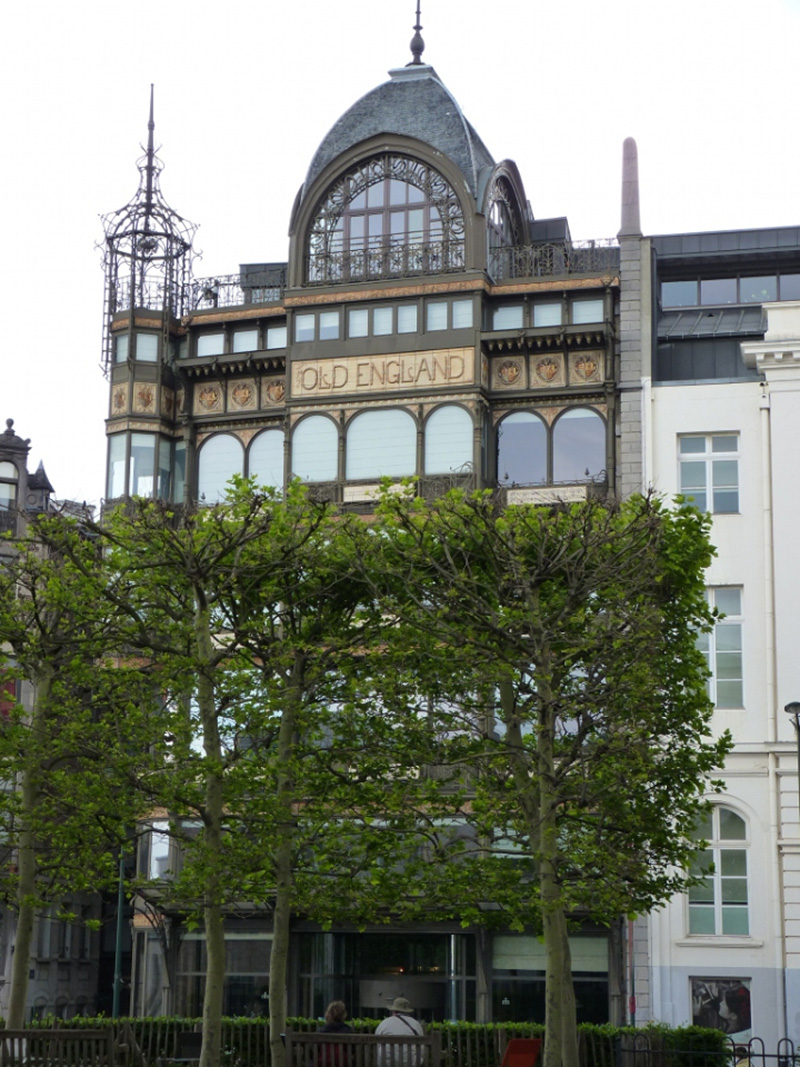 Going down the street down, we obraruzhili very nice modern fleet, which roam totally unpleasant personality a la Romanian gypsies vytsyganivali (pardon the pun) of the passers money for food. Fifth wife some sense realized that now she will be left without a mobile phone and shoved it in my pocket (it in her purse hanging on a belt). And in time, has already made a rack boy of fifteen years, so disappointedly turned away and continued to search for you next victim.

And, of course, cute, etc. Despite the king's horse's ass, which abuts look: 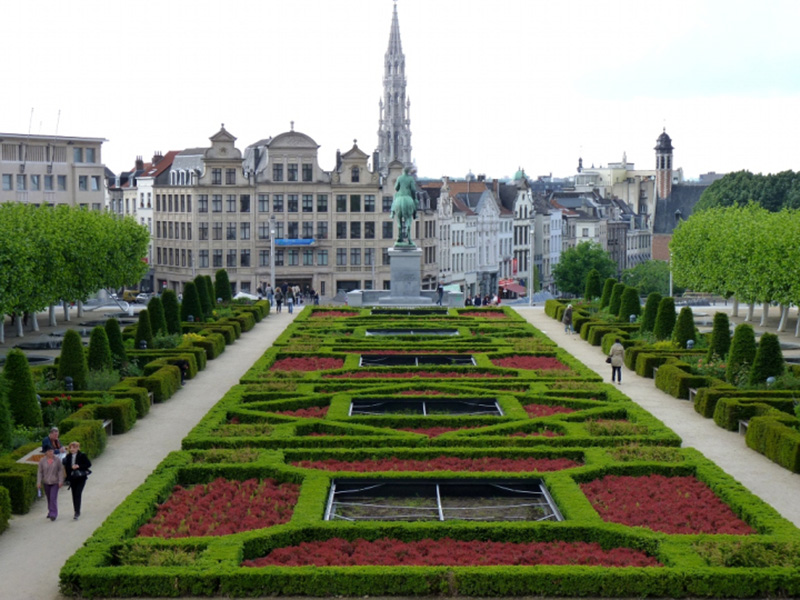 And on this area interesting watch, reminding me of a similar device at the Moscow Puppet Theater. Obraztsova. True, I live has never seen them, but on the TV - some time. 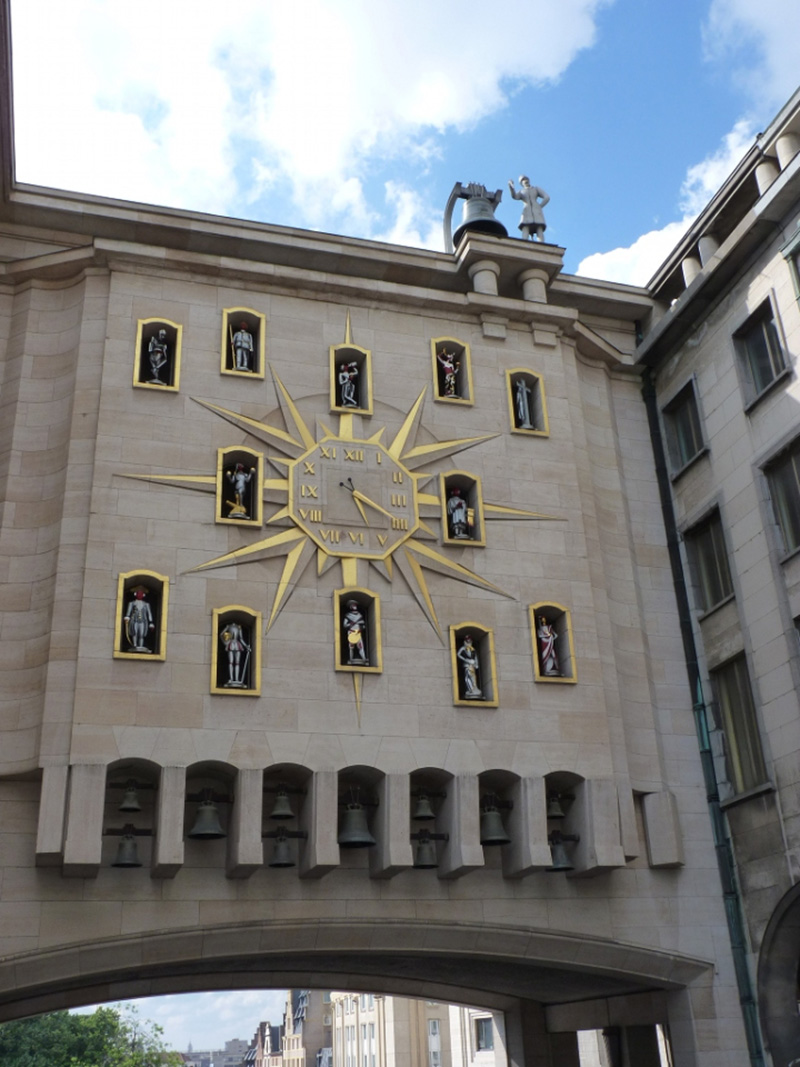