Going round the clock area, we still saw the front of the horse, and even sitting on her King Albert (I understand that I, and not the one they have now.) 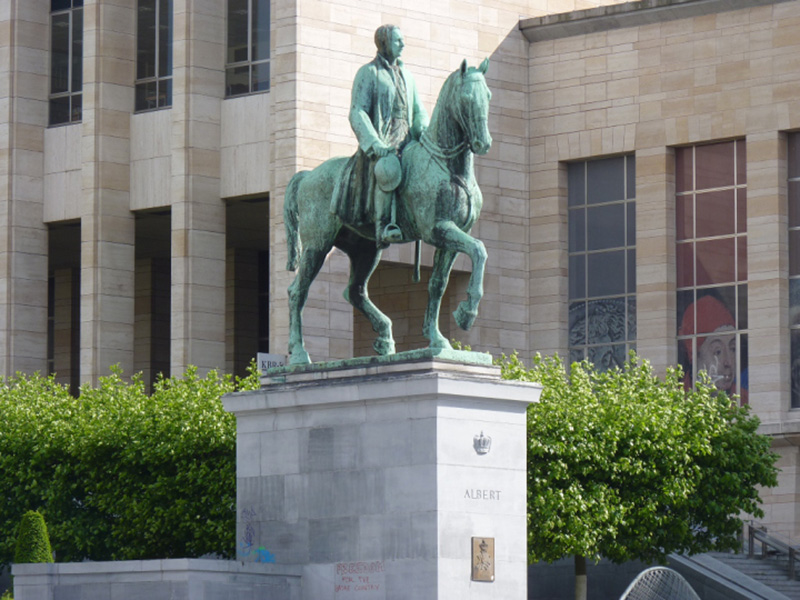 Then, we passed through the mall: 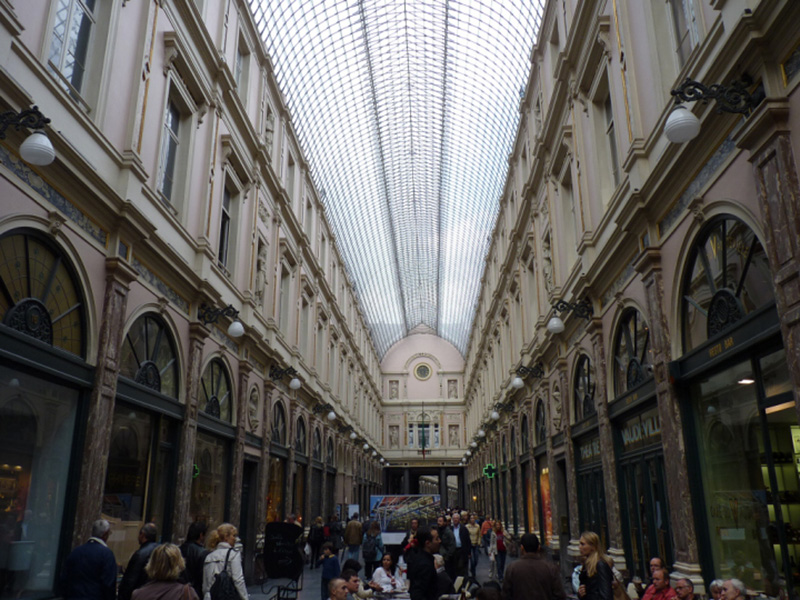 And hit the coveted street sea food restaurants. More precisely, these two streets, they are a kind of letter Y. 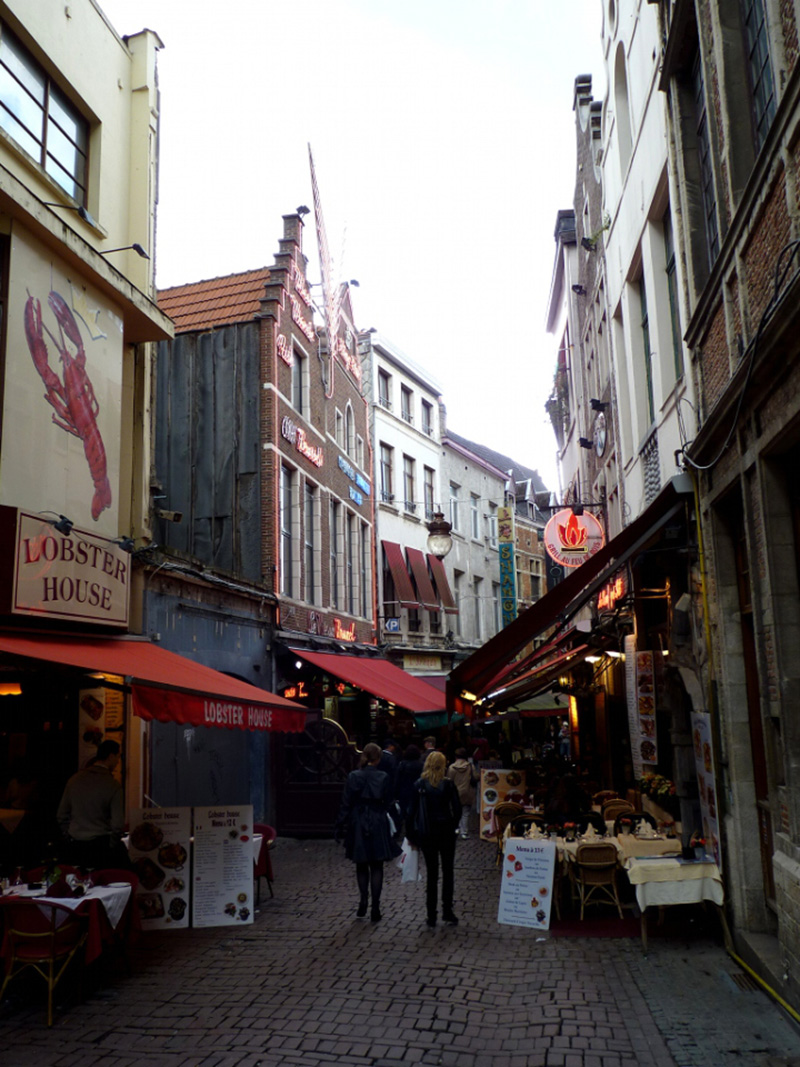 Most of the restaurants (not to say all) belong to individuals of Middle Eastern ethnicity (no, I do not mean the Jews). Menu about the same, the costs are equal to the last cent. No competition is not observed, so that meaning is not to avoid them all. Well, except that itch, the waiter spoke Russian and the menu was filed appropriate - with the Cyrillic alphabet.Personally, I find it easier to read the names in English, because I'm used to the English names, say, mussels clearer to me than the "mussel". Obanglichanilsya, in general.

However, we decided to just not dinner (hearty lunch affected by ferry - with foie gras and other such delights of French cooking) and have put on weight appetite, which came to the area Gran Plas: 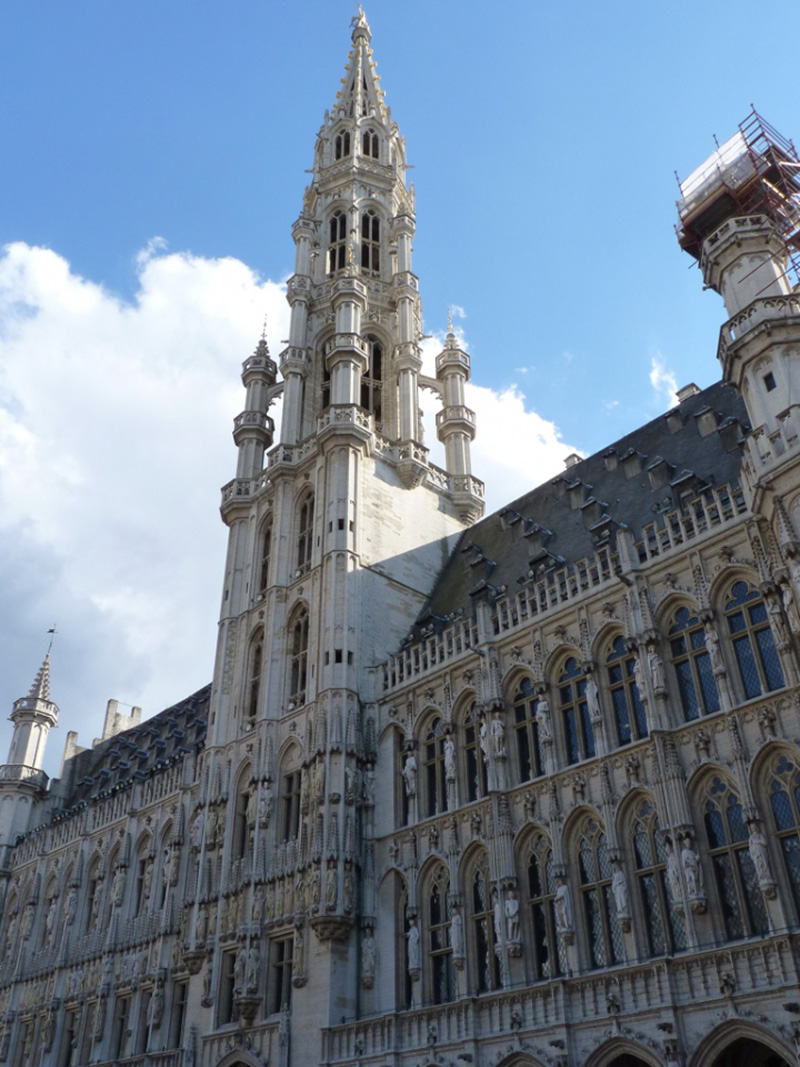 Buildings on the square, as you can see, quite beautiful. However, to my dismay, at this time there was held a jazz festival and played some kind of avant-garde jazz group, randomly extracts the kinds of strange sounds from their instruments. "The crowd enthusiastically listened to" (c) ne_pomnyu_kto. 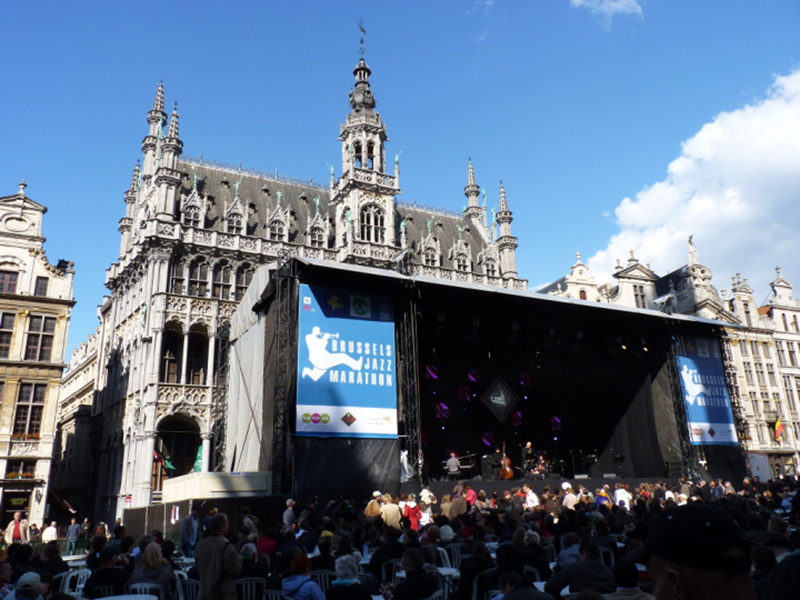 The people, by the way, had a lot - some sitting on the arranged here and there, plastic chairs, and some wandered back and forth, clearly portraying the Brownian motion. What, by the way, stop me from taking pictures illustrious Brussels attractions. 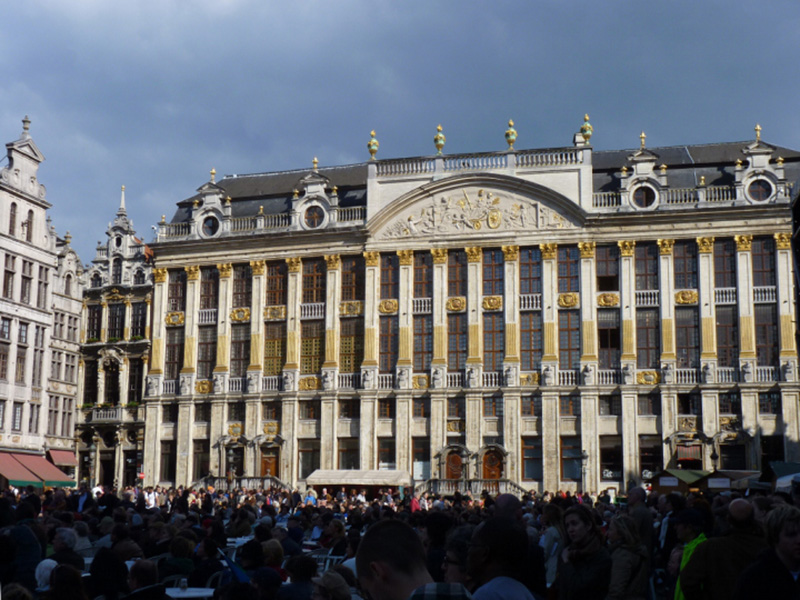 Out of boredom, I decided to test the range of optics in my camera and took a picture of one of the decorations on the roof of the building. Zoom load. Here it is, the creation of: 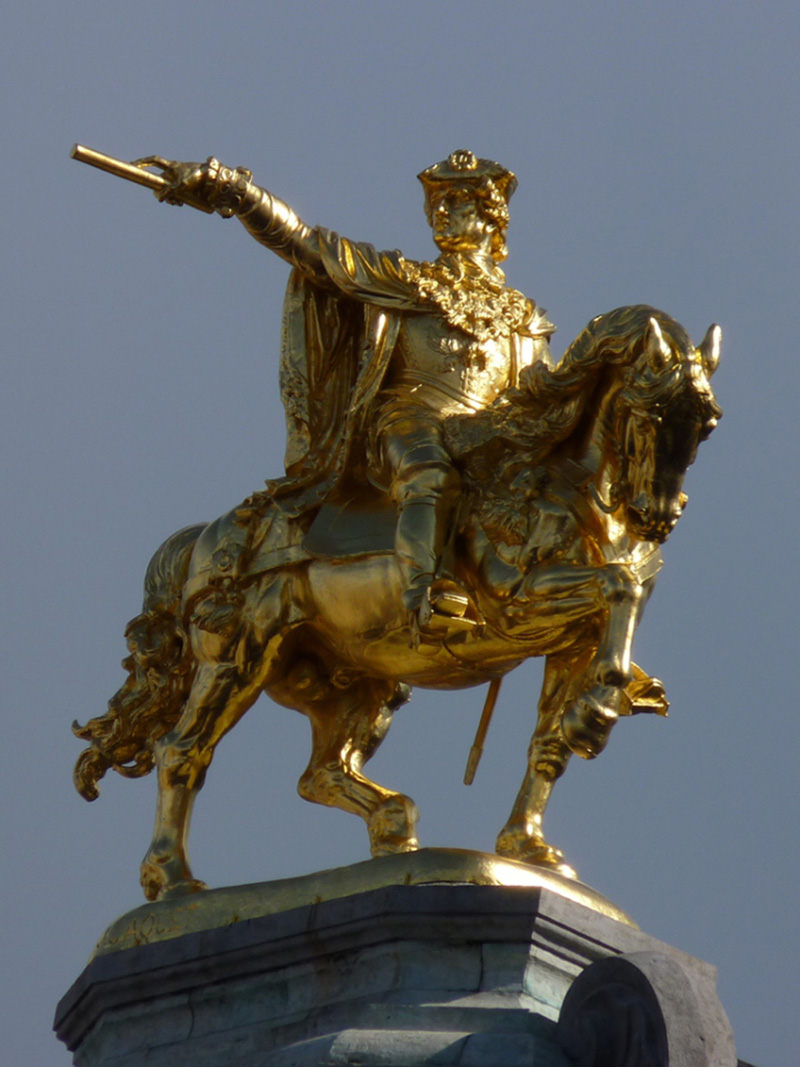 In general, after about an hour of this jazz bullied at himself (I prefer symphonic metal, if someone does not know, however, goes too common metal), the wife decided that work up an appetite, and you can go to carry out the purpose of stay. We went into the first restaurant where she ordered a dish this: 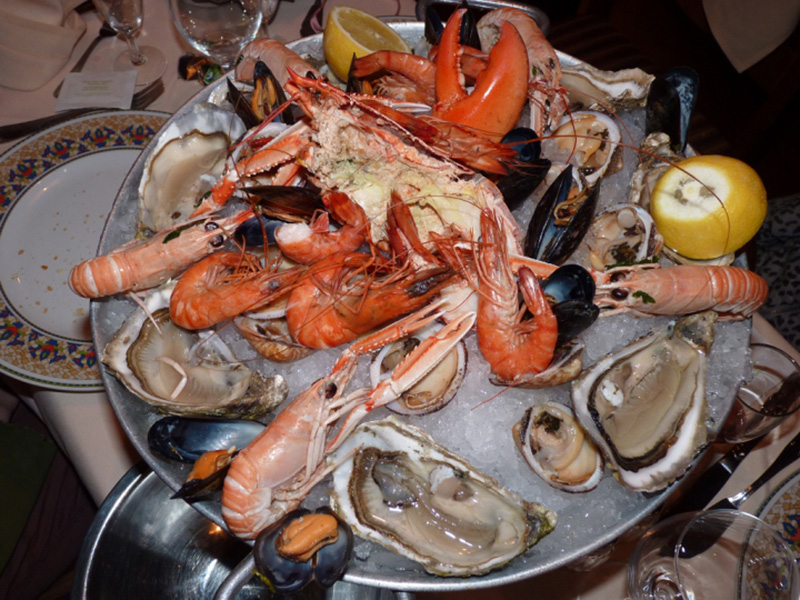 Actually, this is only polblyuda. It's called Seafood Platter (that is to say, a plate of seafood, which, in general, true). Is such a miracle is something around 70 euros for a whole portion, and 35 euros for a half (which you can see on the pictures and above). I myself ordered a pot of mussels, more meat was not served there, buried in them, and probably the first time in my life, I thought the warmth of McDonald's. Well, I do not like marine reptiles in any form - even fried, boiled, though, at least in what. And also do not like the living.

His wife and children were sentenced this dish (or rather, the fact that it brought), and then, with the noise and venting off (because the glut oneself) ate my mussels. As for me, I am satisfied with sausage sandwiches, when he came to the hotel. Anything is better than seafood.

As we walked back - it is better not to write. His wife and children are so gorged ourselves at the restaurant that I just did not have to carry them on his hands. But, characteristically, all my attempts to get a taxi, I was answered that walking helps digestion and maintain the shape. As if that I had to take care to preserve the figure! However, in such a remark wife told me that I should take care to preserve her figure, because it is me then with her (in the sense that the figure) live. Some logic in this I saw and home, we, after all, flooded foot.

Photography on the way back, there was nothing, nothing, however, came a new and exciting, so I'm burning sfotkal residence of our government, which I'm breathing so unevenly (so it burned). Here it is, the European Commission: 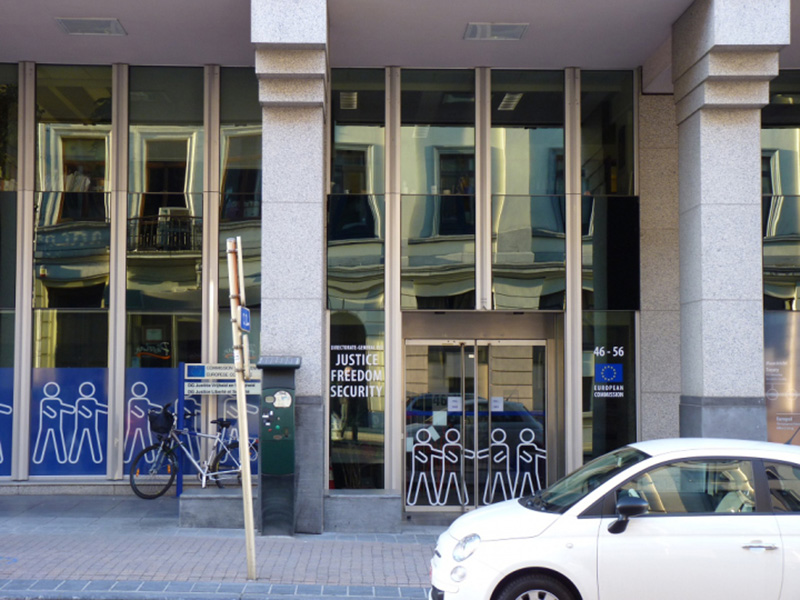 On this, I think we should call it a day, more talk more about what (do not write well about how I fought in the hotel from the DVD, which flatly refused to play our CDs?). The next day we decided to go to the park Mini-Europe (Mini-Europe), but the propaganda about this place, I will write later on. If gather my strength, more pictures turned out a lot, and if you add more text and then employment before the end of the year I provided.