The castle of Wynendale (also spelled Wijnendale) is one of the historicaly most important and most beautiful Flemish castles. This medieval fortress surrounded by a circular moat was almost entirely reconstructed in the neo-gothic style in the second half of the 19th century. 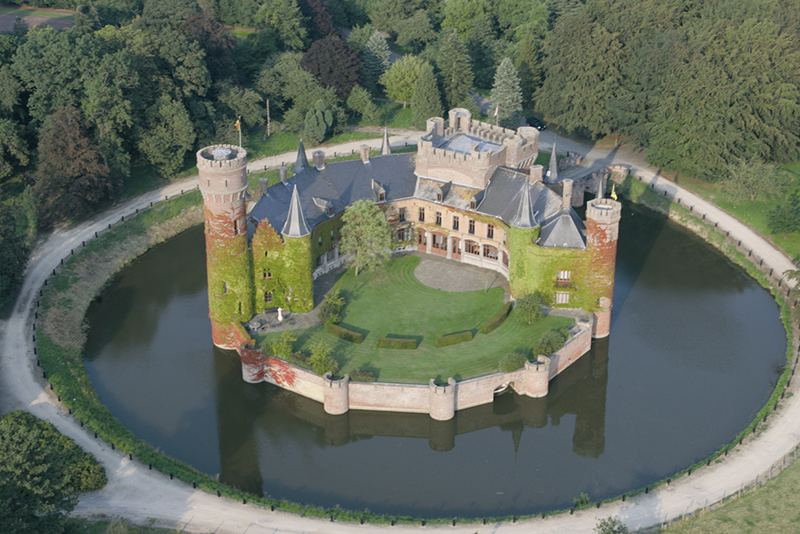 The origins of Wynendale date back to the 9th century, when the vikings annihilated the first fortress and village around year 879.

In 1085, Robert the Frisian, 9th Count of Flanders, built an wooden octagonal fortress which served as the foundation for the present castle.

His grandson, Baldwin VII of Flanders used the castle as one of his main court of justice until his death in 1119.

Upon Baldwin's death Wynendale passed to his nephew, Charles the Good of Burgundy, then to the powerful Guy of Dampierre, Count of Flanders, Namur and Luxembourg. Dampierre rebuilt the castle in stone around 1278 and spent most of his life there.

The castle was taken by Philip IV of France in 1300, then sieged and retaken two years later by the Flemish led by Guy of Dampierre's successor, John of Namur.

The castle became the property of Mary of Burgundy, who tragically died at age 25 falling from a horse. She had married Adolphe of Clèves, and the Clèves family inherited the castle and restored it.

From then on, several famous rulers sojourned in Wynendale, like Charles V of Habsburg, Mary of Hungary, or much later King Leopold II and Leopold III.

The castle was nevertheless destroyed partially in 1578 during the wars of religion, abandoned in the 17th century, and Napoleon ordered the destruction of the whole castle but three towers and a lateral wing in 1811.

After the battle of Waterloo,

Wynendale passed to the House of Orange and served as barracks for the Dutch troops until 1825.

Brussels banker J.P. Matthieu purchased the castle in 1833 and restored it. When he died in 1863, his son asked architect Felix Laureys to reconstruct two-third of the circular medieval castle, adding the big tower to give an increased elegance to the structure.

On 25 May 1940, Leopold III had his notorious discussion with four of his ministers in which he decided to stay in Belgium during the German occupation. That decision was seen by the Belgians as a sign of collaboration with the Nazis and later forced him to abdicated in favour of his son Baldwin.

Wijnendale is a hamlet 3 km north-west of Torhout, between Bruges, Ostende and Roeselare.

Coming by car, you should use the E403 or N32 between Bruges and Roeselare, or the N33 from Ostende.

Trains to Torhout take 12 to 14min from Bruges, 9 to 18min from Roeselare or 33min from Ostende. From Tohout station, try to catch to bus 51 to Ostende and get off at Wynendale, or alternatively, catch a taxi or walk the 3km.