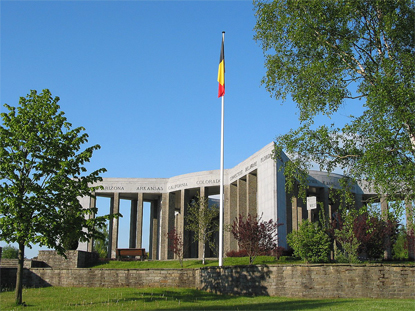 The small town of Bastogne (pop. 13,000), close to the border of Luxembourg, would not figure on a tourist map if it hadn't been for the terrible battle that took place there at the end of the Second World War.

Bastogne is not unlike Ypres at the opposite end of the country, in that it is famous for its war memorials. The American Memorial on Mardasson Hill was completed in 1950 and list the names of the soldiers who died around Bastogne.

Bastogne's most prominent attraction is, however, the nearby Historical Center. The museum has a 30 min documentary about the war, two diaporamas, as well as German and Allied uniforms and weapons. There are several 'left-over' tanks outside, and in other places around town.

By car, take the N4 motorway, which runs between Namur and Arlon via Marche-en-Famenne and Bastogne.

It is not so easy to reach Bastogne by public transports, since the train service was discontinued a few years ago. The nearest railway station is Libramont (50min from Luxembourg, 1h from Namur, 2 hours from Brussels). From there, take bus 163b to Bastogne (45min). Be aware that buses only leave every two hours.