Antwerp  - one of the largest cities in Belgium, it is located in the distinctive regions - Flanders, the land belonging to different historical periods and in different powers, each of which has left imprints on the architecture of the region, and the customs and culture of its people. Visiting Antwerp is a program of many tours in the Benelux countries, but much more interesting to come here on their own, a leisurely stroll along the ancient fairy tale city of Belgium. 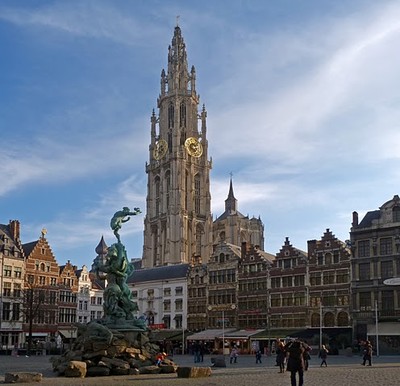 Introduction to the  Antwerp  easier to start with a visit to the historic city center, where the largest concentrations of sights - architectural monuments, churches and museums. One of the most beautiful monuments of the second largest Belgian city include the majestic  Cathedral of Our Lady of Antwerp  in the Gothic style, founded in XIV century, designed by the best architects of the time, Jean Hamel. The cathedral was built about two centuries. The temple is often called the Cathedral of Onze-Lie-Vrouve, that name made ​​in travel catalogs. The old master, after forty years of work on the construction of a beautiful church, died, and the business was continued by his architect son Peter, and later - the other architects. Cathedral was built slowly and thoroughly, during its construction was a fire, so the construction of the south tower had to start over. In 1616, construction work is over, but many of the architect's ideas have failed to realize, so experts believe this architectural masterpiece unfinished, although its facade and interior amazes tourists with its beauty. Although the council has been repeatedly vandalized - its first Calvinists raided and destroyed the Gothic stained glass, tombs and other relics, and then - the troops of Napoleon Bonaparte, the Antwerp cathedral is something to see. Now the Cathedral of Our Lady in Antwerp is the largest Gothic cathedral in Belgium.

Walking through Antwerp, 123-foot majestic  north tower  of the cathedral bell tower, decorated with gilded antique clocks can be seen from far away, residents claim that its spire it rests in the cloud. The south tower of the cathedral just below the North Tower, though, the architect, the cathedral must be symmetric, and in the middle stands Lantern Tower. The interior of the cathedral is preserved marble statue of the Virgin Mary, made ​​in XIV century Gothic frescoes, painted domes, ancient altar, organ, choir and chapels, coffins, in which lie the remains of the aristocracy of Antwerp. Interior decoration of the cathedral are the masterpieces by Peter Paul Rubens on biblical themes - "Descent from the Cross", "Elevation of the Cross", "Ascension of Mary" and "The Resurrection of Christ." 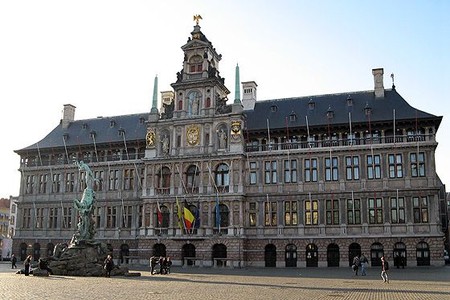 During a visit to Antwerp is to go to the old market square triangular  Grote Markt , one of the most famous sites of which is the  Old Town Hall , built in the Dutch Renaissance style. Its construction began in 1561 and lasted 14 years. Symmetrical Hall built in four floors, and its architectural elements are the tracks and the late Gothic and Italian Renaissance, Flemish and old traditions. By fire in 1576, which occurred during the capture of Antwerp, the town hall was severely damaged, but was later restored to its original form, and the interiors have been updated in the middle of the XIX century, weavers of antique, in the form in which Hall appeared before the fire. Visiting the town hall, you can see the luxurious rooms, decorated with unique frescoes, among which the most interest is the wedding hall, which hosted the wedding ceremonies for centuries. The facade of the old town hall is decorated with heraldic Margraves Flemish Brabant Dukes, as well as the Spanish Habsburgs.

The architectural ensemble of the Market Square  includes other, no less interesting monuments, including the cause Renaissance building workshops and guilds with many narrow high windows and pointed triangular roofs. They were built in the XIX century, much later than the other monuments of the city. The roof of the highest of these buildings decorated gilded sculpture sitting on a horse of St. George with a sharp spear in hand, able to strike at any spot any enemy. 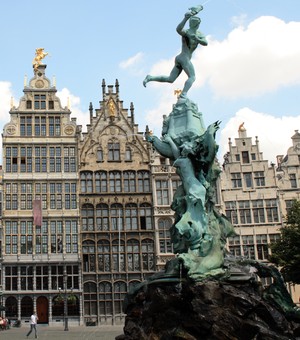 One of the gems of the Market Square and is a grand  Brabo Fountain , built in honor of the legendary Roman legionary Silvius Brabo, managed to win a mythical giant Druon Antigonus, who lived in a bend of the local river Scheldt, which was left skippers, levying a tax on each incoming ship in the harbor. Legionnaire compartment giant's hand and threw it into the river, an old legend says that the event is incorporated and in the name of the ancient city: the word "ant" can be translated into Russian as "hand" and "VERP" - throw. In honor of this event on Meir Street - one of the central streets of Antwerp has another unusual monument - a huge stone hand, a reminder of the giant and the events of bygone days.

Walking through the old town center, is turn to  David Tenera Square , the center of which is a monument to the outstanding artists of Flanders, and the perimeter of the square there is a lot of old stately buildings.

In  the historic center of Antwerp  and is built in the Gothic style Gothic  house butcher  - so called building a medieval guild. In the fourteenth century, meat only sold here, so you can imagine the role of the medieval buildings in the old days. For the construction of the building was used by two different building materials of the time - white sandstone and red brick, and the alternation of these materials is very symbolic, it was intended to evoke the residents association of meat and fat in pork carcasses. On the ground floor of the building guild of butchers in the Middle Ages was a shop where citizens could buy fresh meat, and the second floor by meetings of guild members and employees of the shop, here to make important decisions for the entire guild.

At present in the room where the meat used to be a shop, houses the Museum of Archaeology and Applied Arts exhibition which covers old musical instruments, household items and crafts, a collection of weapons and military uniforms, numismatic collections, as well as ethnographic and historical divisions. The most famous picture of the museum is the product of the "Spanish disease" by an unknown Flemish artist, depicting the atrocities commit by Spanish troops in 1576.

Antique street Meir, historic, luxury building built in the Rococo style, is an essential feature of all the sightseeing tour of Antwerp. Ground floors of residential buildings are all kinds of shops and boutiques where you can buy everything your heart desires. Here is also one of the most famous sights of the city - the majestic  Royal Palace , built in the first quarter of the XIX century, during the reign of King William I. Although at present the Royal Family lives in a residence in Laeken, in this palace often hosts a variety of ceremonies, and the interiors of the palace is richly decorated with paintings by contemporary Belgian artists. The street is Meir and two sacred buildings -  the church of St. Jacob  XVII century building in the Gothic style of Brabant, and  the Church of St. Augustine .

Of particular interest is the church, named after St. James - for centuries the aristocracy were buried in Antwerp, in the temple, and the ashes of the world-famous painter Rubens. The interesting and architectural appearance of cruciform in plan of the church, the Basilica of the architectural elements of late Gothic architecture, and in the interior of the church there are pictures painted by Rubens and his disciples. And next you can see theater "Burla" and an old shoe market, which is called by locals "Shunmarkt." Mair Street leads to the central train station, which is also a landmark in the city. 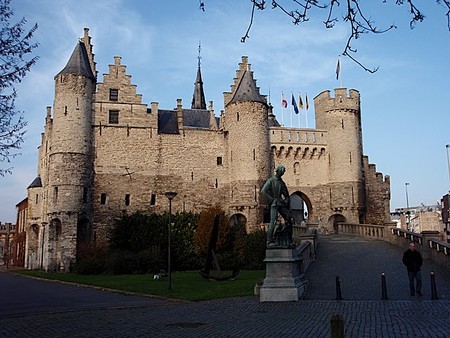 Medieval Castle Walls  can easily be called the oldest building in the city, the exact date of its construction is unknown, as the true date of the founding of Antwerp. It is known that part of the castle walls can be dated IX century. Old Castle is located on the River Scheldt - the main artery of the city, in its place was a powerful first fort, which aims to secure the protection of the city and its residents from attacks of the Vikings and pirates, and a modern look medieval castle acquired in 1520. For a long time, the powerful castle walls with reliable, who for many years was considered impregnable, was used as a prison - high thick walls did not allow prisoners to escape. History has not been kind to this masterpiece of Belgian fortifications - in the XIX century medieval castle was considerable damage, but was later restored to its original form.

The chateau, and all of its territory reserved for the National Maritime Museum, the exhibition which introduces visitors to the history of the port of Antwerp, shipping and navigation, including the museum's collection is a lot of ship models specific to different historical eras. At the entrance to the castle you can see the unusual monument Vapper Length (Lange VALLER)  - Antwerp folklore character who appeared in the square in 1963. According to legend, this mythical inhabitant of the city is constantly changing their appearance - that appeared in front of the citizens in the form of a giant, then a toddler, vytvorit small ugliness of it particularly problematic getting any drunken residents. Not far from the castle walls, this is another monument - Roman warrior Minerva, which stood on the embankment Scheldt, peering into the distance, in the direction of a medieval castle. 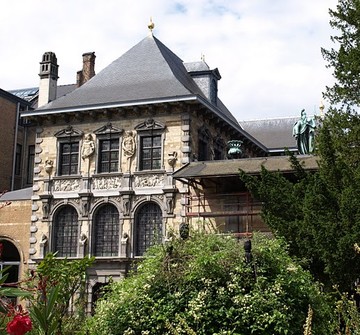 Antwerp is inextricably linked to the life and work of the famous artist  Peter Paul Rubens , and his house, built in 1611 and has long been recognized as one of the architectural monuments of the city, a magnet for tourists from around the world. Here the great painter spent the last years of his life, until his death in 1640. Particularly striking in its originality appearance of the facade of the ancient three-storied building of the patio on the ground floor there is a massive black door adorned with a portico and a bas-relief, and the facade of the building is decorated with numerous bas-reliefs. Unfortunately, the interior of the time Rubens was not preserved, and the premises are furnished with other furniture in the house, dating from the middle of the XVII century. The interior is particularly striking bed, something resembling a huge cabinet with doors, furniture are also so different from modern decor interior.

Among the museums of Antwerp great interest is the Royal Museum of Fine Arts , founded in 1810. It is an area of Leopold De Waelplaats in the old building, built in the years 1884-1890 specifically to house the museum exhibition.The museum's collection includes the most important period of cultural life in Antwerp - from XVI to XVII century, when the city experienced in the art of the greatest prosperity. Among the museum's exhibits are paintings by Jan van Eyck, Jean Fouquet, Antonello de Messina, Hans Memling, Titian, Quentin Masseysa, Anthony van Dyck, Amedeo Modigliani, and other eminent artists. Are of interest not only to the museum exhibits, but also the building of the museum, built in the classical style, the facade is decorated with columns and sculptures.

The sights of Antwerp, and the building is  the Flemish Opera House and the old zoo and the Baroque Church of St. Charles and James, and St Andrew's Church, and House of Jordaens, and the girl's house, and the Church of the Holy Carol Borromeo, and the house of "The Mirror." Arouse interest and buildings of the old and the new exchange and Farm Tower «Boerentower» - is the oldest skyscraper in Europe, built in 1932.

The city has many museums - the Museum Plantin printer, the Museum of Modern Art, Museum of Ethnography and Folk Art Museum, diamond, a museum of sculptures to "Middelheym" and others in which the priceless collection of exhibits. All attractions in Antwerp difficult to list - in this city need to come and meet him yourself, step by step.